We offer a wide range of polarizers and polarization optics for many different uses.

Choosing the right polarization optic for your application can be a bewildering task, as we offer a wide range for many different uses.

Feel free to contact us for assistance. Our experienced staff is only too pleased to help you with the decision process. 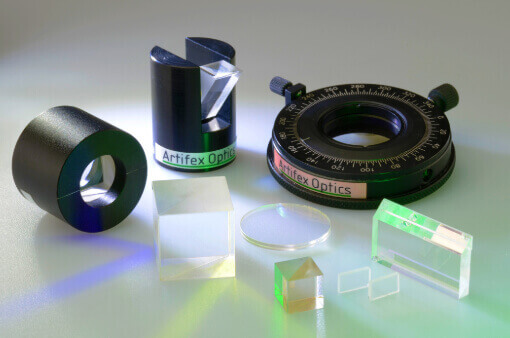 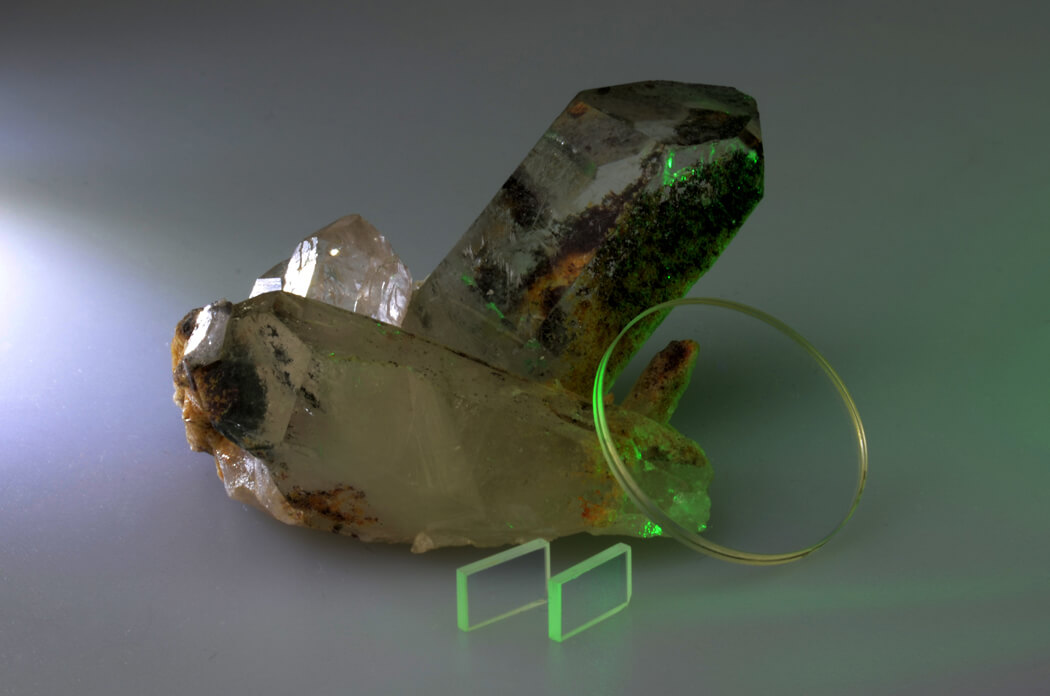 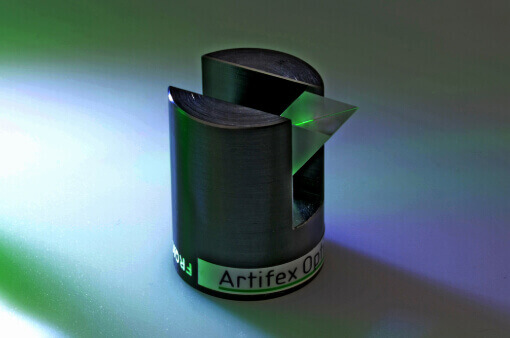 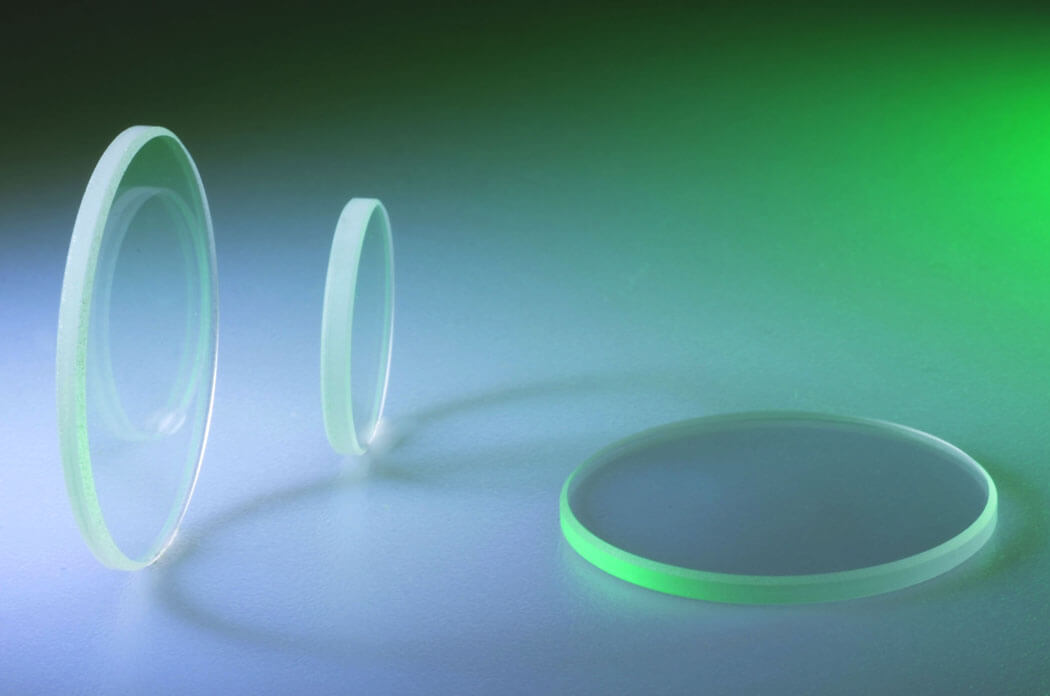 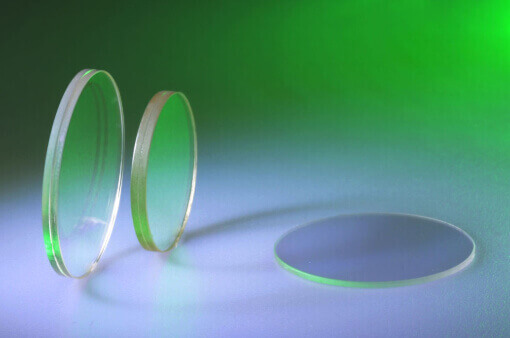 TO PRODUCT
Tutorial on birefringent materials for polarizing crystals

Linearly birefringent uniaxial crystalline materials are characterised by having a unique axis of
symmetry, called the optic axis, which imposes constraints upon the propagation of light beams
within the crystal. Two modes are permitted, either as an ordinary beam polarized in a plane
normal to the optic axis, or as an extraordinary beam polarized in a plane containing the optic
axis. Each of the beams has an associated refractive index, such that both the electric field
(wave normal) velocities and the beam (ray) angles of refraction are different. It is this latter
property that enables suitably cut and oriented prisms of birefringent materials to act as
polarizers and polarizing beam splitters.

If a plane polarized beam propagates down the optic axis of a material exhibiting circular
birefringence it is resolved into two collinear circularly polarized beams, each propagating with a
slightly different velocity. When these two components emerge from the material, they
recombine into a plane polarized beam whose plane of polarization is rotated from that of the
incident beam. This effect of producing a progressive rotation of the plane of polarization with
path length is called optical activity, and is used to produce optical rotators.

We use various materials out of a fairly wide range of birefringent crystals for the production of
our polarizing components – calcite, crystal quartz, magnesium fluoride (MgF2), YVO4 and -
BBO.

Calcite is a widely preferred choice of material, owing to its very high birefringence, wide
spectral transmission and the availability of reasonably sized crystals. Unfortunately, calcite
cannot be manufactured synthetically. Only natural crystals exist which limits the maximum size
with good optical quality. It has the advantage of being non-hygroscopic, so that protection from
the atmosphere is not necessary, though it is a fairly soft crystal and is easily scratched. We
have perfected a number of proprietary processes for cutting, grinding and polishing perfect
optical surfaces on calcite prisms, routinely achieving flatnesses down to lambda/8 over several
cm with 10/5 scratch dig. These skills are evident in the high quality of the finished components,
and enable our polarizers to be used with very high peak power lasers.

Quartz is an extremely useful birefringent material and is available as either natural crystals or
as synthetic boules. Natural crystals occur as rough lumps that require orientation to determine
the optic axis before processing, while synthetic crystals have reference surfaces aligned to
crystallographic axes. When deciding which sort of quartz should be used for a component, two
parameters that differ significantly between the two types should be considered: size and
spectral transmission.
In general, components from synthetic quartz are limited to a maximum size in the direction of
the optic axis of around 70mm, while natural quartz boules are available large enough to yield
working apertures up to 100mm. The other significant discriminant between natural and
synthetic quartz is the low wavelength cut-off. Natural quartz has a useful transmission (app.
80%) from 220nm, while synthetic quartz transmits similarly from 190nm. Both transmit out to
about 2.6µm.
Quartz is very hard (Mohs scale 7) and is very strong. It thus lends itself to the fabrication of
very thin low order retardation plates. Unlike calcite or magnesium fluoride, quartz exhibits
circular birefringence, and there is no unique direction (optic axis) down which ordinary and
extraordinary beams propagate under one refractive index with the same velocity. Instead, the
optic axis is the direction for which the two indices are closest: a beam propagates down it as
two circularly polarized beams of opposite hand edness (chirality). This produces progressive
optical rotation of an incident plane polarized beam; which effect is put to good use in rotators.

Single crystal magnesium fluoride is another extremely useful material for the production of
polarizers due to its very wide spectral transmission, extending from 120nm in the vacuum
ultraviolet to beyond 7.0um in the infra red. Because suitable index matching cements do not
transmit below 220nm, magnesium fluoride polarizers are manufactured by optically contacting
the two prisms.
Thin plates can be manufactured from this material for use in achromatic retardation plates. In
these optical components the spectral dispersion of the magnesium fluoride is used to
compensate that of quartz, producing a near uniform retardation over a defined spectral band.

Yttrium orthovanadate is useful due to its extended wavelength range. We provide polarizers
functional to 4000nm (4µm) wavelength. Magnesium Fluoride is also a good candidate, but the
separation angle using YVO4 for Wollaston and Rochon polarizers is much higher.

The high Temperature form of BBO (-BaB2O4) is a negative uniaxial crystal. It has a large
birefringence over the broad transparency range from 190 nm to 3500 nm. Due to its unique UV
transparency, good mechanical properties and high damage threshold, -BBO is an excellent
crystal to replace Calcite, TiO2, and LiNbO3, etc. in Glan-Taylor and Glan-Thompson Polarisers
as well as walk-off beam splitters, especially for high power and UV polarizers. Since the crystal
is centrosymmetric, it cannot be used for non-linear optical applications.

We hope this short tutorial has been of use to you. If you require further information on the birefringent materials available or on component possibilities, please contact us.

We take quality control very seriously: we rely on accurate, widely recognized measurement systems for testing our optics. The following table indicates the accuracy of measurement for the most relevant parameters.

Why do customers choose Artifex as their optical component supplier?

Over 20 years experience in optics

Any cookies that may not be particularly necessary for the website to function and is used specifically to collect user personal data via analytics, ads, other embedded contents are termed as non-necessary cookies. It is mandatory to procure user consent prior to running these cookies on your website.

Get your free day ticket